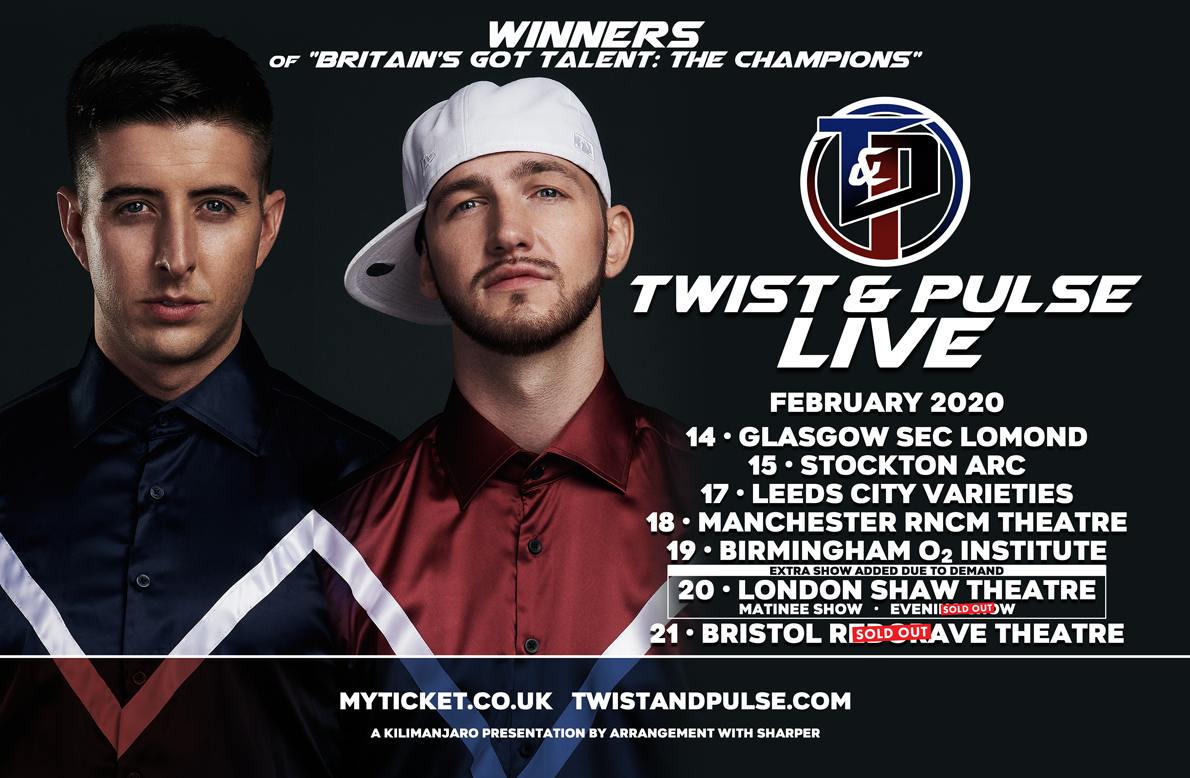 Born and bred South Londoners, Ashley Glazebrook and Glen Murphy, met at the renowned ‘Brits School of Performing Arts’. Through a joint love of dance, they have quickly become role models for young people around the UK. As their alter egos, Twist (Ash) and Pulse (Glen), they quickly shot to fame on one of the most watched TV shows in the UK. They achieved 2nd place on ITV’s ‘Britain’s Got Talent’, managing to win over both the public and Simon Cowell and his formidable team, with their talent and charm!

Later, they made celebrated return to the top rated show with their own dance company. They have been a mainstay on numerous TV shows on national television since. Their journey since ‘BGT’ has been a whirlwind! Not content with just winning over the U.K, they have performed worldwide including taking the role of celebrity judges on China’s biggest street-dance TV show on CCTV5, with a viewership of 400 million people!

Fast gaining attention as sought after creatives, in 2018 they won the ‘BEST Choreography’ award at the coveted ‘Great British Pantomime Awards’. Brand ‘Twist and Pulse’ is ascending. Other highlights and appearances have included: Olympic torch relay bearers, Ambassadors of the official princes trust charity “The Diana Award”, Presented and opened the children’s BAFTA’s. Achieved a Guinness world record for the most amount of synchronised dance moves in 30 seconds (148 Moves!!!) AND most recently they have taken the internet by storm by producing their own short films and viral dance videos. Their total YouTube views have hit over 80 million!

In 2019 Twist and Pulse were invited back on BGT but this time for Britain’s Got Talent: The Champions. A competition which would pit them against the winners and iconic acts from all around the world and the last 13 years of the show. After getting the Golden Buzzer from judge Alesha Dixon in their heat, Twist and Pulse went on to conquer the Grand Final and be crowned ‘Britain’s Got Talent Champion of Champions’.

With 2020 being the 10 year anniversary of Twist and Pulse and to celebrate their extraordinary win, the guys will be going on their first ever UK tour in February.

Statement from Twist & Pulse:
"Auditioning for the show 9 years ago was the best decision we ever made, we couldn’t have even asked for a place like runners up. To then come back to compete on ‘BGT The Champions’ was an honour in itself, to then go on one step further and be crowned champions, is mind blowing! Becoming the champion of champions has been a dream come true. Next year we celebrate 10 years of Twist and Pulse so we've already got a great tour lined up and we can’t wait to see what else the future holds for us."

Early entry to the venue